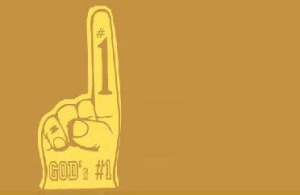 We began our first learning night by reading the 1st commandment out of Exodus 20:3-6. Then we asked what the point of this rule was. We realized that in our reality here in central Iowa, we really don’t run into situations very often where people are actually worshiping other/lots of gods. So to better understand the reason this commandment was important we looked into a few different stories from scripture where other gods played a prominent role. Here’s what we read: 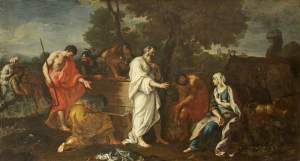 Rachel steals her father’s household gods.  This story out of Genesis 31 tells of the time when God told Jacob to leave his wife’s family. Despite a promise of safety from God, Jacob’s wife, Rachel, decides that she would like to keep her father’s households God’s just in case. When Rachel’s dad, Laban, finds the fleeing family, Rachel has to come up with a clever way of hiding the statues.

Aaron makes the golden calf. Reading Exodus 32 brings us the story of the first time the commandments were broken. Since Moses had remained on the mountain for a few days, the Israelites assumed Moses had died and convinced Aaron to make a new God for them. When Moses returns, he is extremely upset and takes the calf, burns it, grinds it up, sprinkles it in the water, and tells the Israelites to drink it. 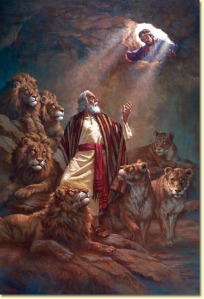 Daniel in the lion’s den. In Daniel 6, we read of a group of advisers who convinces a king to force a nation to worship only him. Daniel remains devout, and, despite being the King’s favorite adviser, he must suffer the punishment for failing to worship him. Daniel is thrown in a den full of hungry lions. However, when he prays to God he is saved from being eaten. And when the king learns of his adviser’s trick, he places them in the den instead of Daniel. They are eaten almost instantly.

Elijah and the prophets of Baal. When Elijah challenged the prophet’s of Ba’al to prove their god’s power against the Lord in 1 Kings 18. After a long drought, 450 of Ba’al’s prophets went up against Elijah in a sacrifice-off. The first to get their God to light their sacrifice on fire would win. Elijah sat back and let the prophet’s of Ba’al scream, yell, and even cut themselves all day. In fact, he made fun of them. Then at the end of the day Elijah poured water onto his altar, and prayed to God. A lightning bolt came down from the sky and incinerated the bull, the wood, and even the stones of the altar.

The Dagon statue falls. In 1 Samuel 5, we hear of a time when the Philistines captured the Israeli people and held the Ark of the Covenant (which held the 10 Commandments among other things) hostage. They attempt to place the Ark inside of the temple to their god, Dagon. And the statue of their god falls over not just once, but twice, it’s head and hands fall off the second time.

Paul addresses the “unknown god”. Acts 17:16-34, Paul finds himself in Athens. There he is baffled by the vast number of temples to different gods, especially the temple to someone known as, “The Unknown God”. He began to speak out in the synagogues and markets. Eventually the people of Athens invite him to lecture in the Areopagus (the central amphitheater), where they ask him to speak to all of the learned people about his amazing God who made everything.

As we read all of these passages we realized that there is a constant pull to worship “worldly gods” even today. We finished up by reading something Jesus himself said regarding worshiping multiple things:

” No one can serve two masters; for a slave will either hate the one and love the other, or be devoted to the one and despise the other. You cannot serve God and wealth.” -Matthew 6:24

We then challenged ourselves to examine our own lives to see what we really spend most of our time doing or worrying about.

What can you do each day to guard yourself from breaking the first commandment?